Good News Back from the Field! 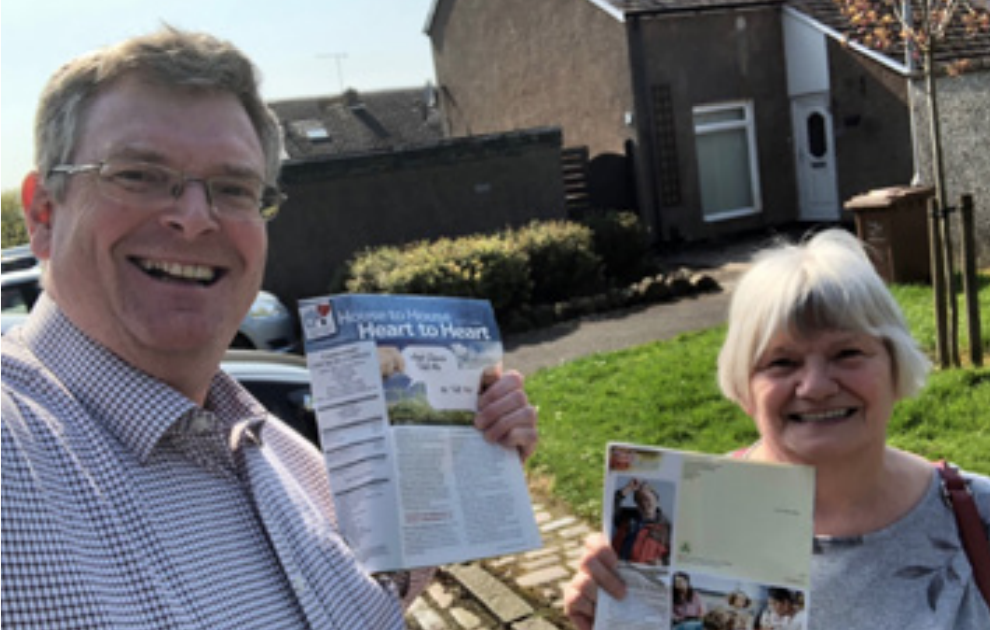 Knocking Doors
We were encouraged on Saturday to see two Facebook posts, back to back, from two states, and two different congregations who use House to House.
These congregations were out door knocking in their communities, following up with their mailings, and taking the gospel to their neighbors.
Take a look at the pictures. This is how House to House gets its best results in the local congregations.

Our thanks to Sullivan Village in Lawton, Oklahoma, and Bridge Avenue in Weslaco, Texas, for working for the Lord. Pray for them.

Spreading the Seed in Scotland
“At the end of April, Janet and I went around houses in the neighborhood distributing copies of House To House, Heart To Heart.”

Contacting New Movers!
Damon Cook with the Normangee church of Christ in Texas called to say that he contacted the first of the 16 names on his New Movers list. The older gentleman was very excited that he had been contacted and said he had already received a letter from the church. He was “chomping at the bits” to meet with the preacher and members of the church. We had our first visitor Sunday who came from HTH delivered to his home. Before he left, he said he would see us Wednesday and that he thinks he has found his new church home.

Some Flowers Take Time to Bloom
While many plants generously display their flowers every year, others take their time before blooming. The kurinji shroub, native to southern India, blooms once every twelve years. When it does, it turns the hillsides a beautiful shade of bluish purple.

Stuart Melheim from the Celeste Church of Christ in Celeste, Texas recently called. They had a baptism from House to House two weeks ago. The woman got House to House the last time they mailed it, and because of that she visited them. She has been at every service since before finally becoming a Christian.

Sow the seed, and you never know when it will produce a harvest! Even if it’s 12 years later!

Wonderful Results in Prisons
Charles Hunt from the Waynesboro church of Christ reports that he teaches a weekly Bible class at a prison in their area, and he has a Sunday night service for those who have been converted. He called us to say he has baptized about 25 in prison ministry since December. He said House to House has been a big part of it. He teaches them, starts them on our Bible courses, and leaves copies of HTH and tracts for them to read between classes.

He said prison is the best thing that has ever happened to a lot of them because all they have is time to study. “And you shall know, the truth, and the truth shall make you free” (John 8:32).

County Wide Mailing and a Conversion
Five congregations in Chattooga County, Georgia, had an old school tent revival two weeks ago. To help advertise it, they mailed the March issue of House to House to every home and P.O. Box in the county. That’s about

12,000 copies. They left off any church name and just said, “Come hear the gospel.” March’s main article was “10 Things I Wish the World Knew about Jesus,” which was the perfect topic for this event. Eric Owens was the speaker— an excellent choice.

Robby Eversole reported, “Carol Hartline attended every night of our revival at the AG Center. We have continued to study with her and tonight we have a new sister as she was baptized into Christ for the remission of her sins. To God be all glory and praise.” Carol told Robby she found out about the meeting when she got House to House.