Reaching the Lost: House to House/Heart to Heart Reaches Charlie 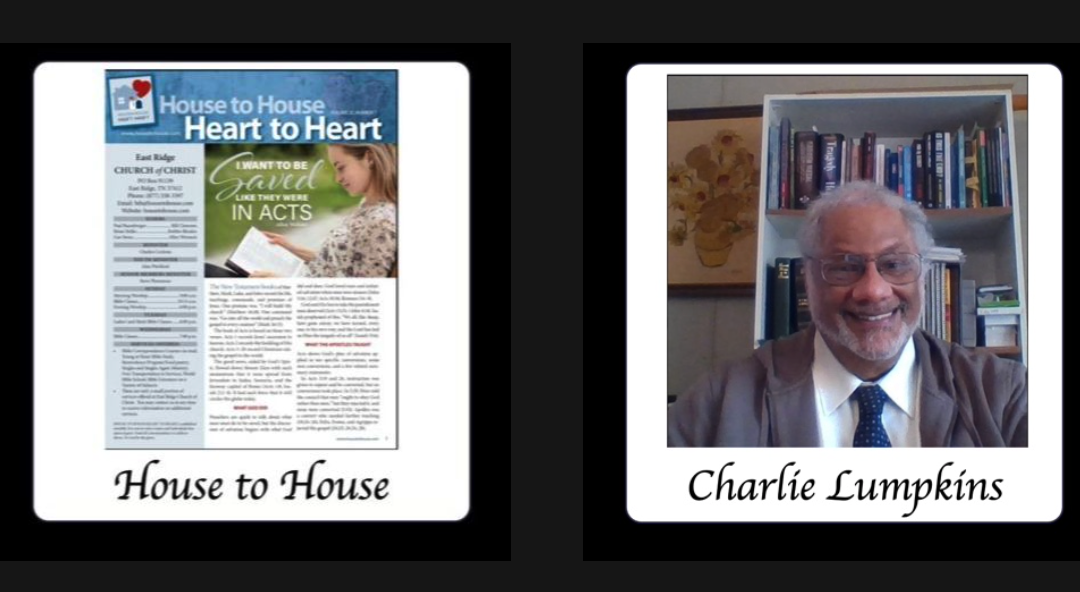 I am pleased to introduce myself. I am Charles Lumpkins; feel free to call me Charles or Charlie. I have been on the faculty at Pennsylvania State University since 2006, teaching history-oriented courses in the Department of African American Studies and a writing-intensive history course in my home department, the School of Labor and Employment Relations … I entered the program after working twenty years as a professional librarian.

In spring 2017, a heated discussion ensued in my African American Studies class over several social-cultural issues of the day. Three or four students said disparaging words about the Bible and Christianity. At that time, I had been a practicing atheist for at least forty years, and I did not care what the three or four said. Yet I could tell they were uttering talking points out of ignorance. I believed if a person expressed a hatred of a religion, then he or she should explain the hatred by pointing to specifics in the sacred text of that religion. But what was worse, despite my upbringing as a Roman Catholic, I was ignorant of the Bible and unable to refer to specific passages in the Bible to correct the students’ misunderstanding.

I decided that I must attend a church Bible study group to learn what the Bible says. I thought of a nondenominational church one of my sisters recommended that had a Bible study group for adults that met on Sundays. I did not go to that church because the Sunday bus schedule was inconvenient. (I owned neither a car nor bicycle.)

More importantly, I felt overwhelmed by my wife Rita’s hospitalization in December 2016 and in March and August 2017. With each hospitalization, the doctors said she was near death. Of course, I used her illness as an excuse not to go to any Bible study. I was challenged to be a caregiver for Rita who became thoroughly exhausted from her ordeal. For several months, she used a four-wheel walker and a cane for mobility and had visiting physical and occupational therapists instruct her on adjusting to her new situation.

In September, I became embroiled in a running family argument over money matters between two of my sisters and one of my brothers and his social worker friend. My sisters abruptly stopped talking to me. Then I fell ill for several days with the flu in October. Being that sick was unusual for me. I felt something—maybe God—was telling me to get serious about attending a Bible study group. I no longer felt that Bible study was an academic exercise but a form of emotional or spiritual healing. I needed to get serious about attending a Bible study.

Early in November, I glanced at an issue of the House to House periodical that the State College Church of Christ mailed to residents in my neighborhood. This time I read the issue and noticed the schedule of church worship services and Bible study groups. I decided to attend the Wednesday night Bible study in mid-November. The irony is that I had often walked by that church since I moved to the neighborhood in 2006 and never thought about attending Bible study there until I read that magazine issue.

The men and women in State College Church of Christ Bible study group were very welcoming and curious as to what brought me to the Bible study. I got involved in the study and asked numerous questions. I continued week after week with the study. In retrospect, the members of the group were very patient with me, knowing that I was spiritually a baby inside an adult who desperately wanted to become spiritually matured ASAP.

I became excited about the Bible, but I needed much guidance. In December I invited two married couples, Todd and Tricia and Kelley and Maria, to my apartment where Rita and I could have Bible study with them. I struggled emotionally, feeling awful that I had neglected God for over forty years—forty spiritually wasted years. I started attending Sunday morning worship service at the State College Church of Christ in late December and Sunday evening worship in January 2018. Then I made the plunge—no pun intended—to be baptized in February. By April, I began to participate in Sunday worship service by giving scripture readings and opening and closing prayers and later serving the Lord’s supper and collecting offerings. In time I assisted as a facilitator, not as a teacher, in Bible study sessions on Sundays at the church.

I believed I had to make up for the lost years. Nonetheless, God is patiently guiding me and making sure I pace myself.

Congregational Reports
Hico church of Christ, Texas: James Nash (preacher) reports, “We currently have three studies going at once with a fourth one probable. Busy here; l will inform of conversions (I hope).”

Adairsville church of Christ, Georgia: Rick Lawson (preacher) reports, “Our elders are leading us in beginning the evangelism strategy you presented last year. Brother Steve McCaslin stood before the congregation and presented the “Bringing, Teaching, Keeping” strategy. We are training soldiers for the field! Next Sunday is meet/eat/reach. We will send out compassion cards to members who haven’t come back yet, as well as new prospects!”

LaFollette church of Christ, Tennessee: Ben Shaffer (preacher) reports, “Some great news! Adam and Raquel are members of the congregation here. They have been studying with Raquel’s parents (who live in Wisconsin) for a few weeks over FaceTime. This weekend they went up to visit, and both parents were baptized into Christ. Please pray for Norb and Jean Kucharski as they begin the new walk with Jesus! I am set to meet with a gentleman named Phil this week to begin book one of Back to the Bible. He has visited a few times and is curious to why we do the things that we do. We are also going to be making personal visits this week to a few of those who have been receiving compassion cards. We are hopeful that doors will be opened.”

North Jefferson church of Christ, Mt. Pleasant, Texas: Jeff Whatley (associate minister), reports, “Please welcome our new sister in Christ, Amber Paske. She was also very appreciative of all the encouragement she has received and blown away by all the cards. She had Bible studies with Tia, Carrie, and Keely.”

Kris Groda (preacher) reports, “Garth, one of our elders, studied with Alex. Alex comes from a very difficult environment. The congregation took him in a couple years ago. We used Does It Matter since he has attended for so long. When we were working on answering the questions for the need for baptism, Alex decided he needed to make that his next step. He was added to the Lord’s church with only three of us in attendance. He did not want to wait! We are starting our official new converts class next Sunday, and it will be taught by our elders.”

Jacksonville church of Christ, Alabama: Theresa and Dray visited on Sunday. The members were very welcoming. One of our new convert families (Cameron and Lindsey) actually sat with them! We are planning to eat with them this week and have a study on Thursday. Please pray for the Conners.

Sevierville church of Christ, Tennessee: Kevin Ruiz (preacher/elder) reports, “We will finish training the congregation with the BTTB PowerPoint series on Sunday. It has been a great study. Our new converts class is going well, and one of our ladies is mentoring a new sister and studying David Pharr’s The Beginning of our Confidence with her. We have four recent visiting non-members from the community that we are reaching out to and another contact that is receiving compassion cards after losing his mother. We are hopeful that these will lead to Bible studies in time. We have many members working hard and participating in the work and we are delighted in the positive changes we are seeing.”

Elizabethtown church of Christ, Kentucky: Rick Webb (member) reports, “Good morning, brother. After our third ZOOM study with my cousin and his wife in Florida … I am happy to announce that we have a new brother and sister in Christ, Rick and Sherry Walker. We were going to contact elders there this morning to arrange for baptism. They both were moved to “fear and trembling” (Philippians 2:12) and wanted to be baptized immediately. We FaceTimed them and they were baptized for remission of sins in their community pool just after midnight. Praise be to God. To Him be the glory.”

Willow Avenue church of Christ, Cookeville, Tennessee: Jonathan Medley (deacon) reports, “Sorry for the late message. The greatest thing happened tonight. I came into the auditorium for our devotional time after class, and one of the people on my evangelism bookmark that doesn’t go to church anywhere was sitting on the back pew. I had no idea she would be there. I hadn’t even invited her yet. Hopefully I won’t get struck dead, but I sent a text to about 20 people during the devotional, telling them she was there and asking them to talk to her before she left. A ton of people went up to meet her. It was great! We’re going to get compassion cards out to her starting tomorrow! It’s amazing when the whole mindset of changes for the way you see souls instead of people.

Rob, we were doing this at 4:30 a.m. this morning. That’s my 12-year-old daughter Avery! It’s been a good morning. I had been going through the BTTB booklets with her. She woke us up at 2:15 saying she wanted to be baptized because she knew if Jesus came back that night she wouldn’t be going to heaven. She was a little iffy on some of the understanding when I asked questions, so we went through Book 3 really quick and that cleared up any confusion she had.”

Hillsboro church of Christ, Tennessee: Shelby Moorman (preacher) writes, “We began going through Back to the Bible on Sunday evening. Studies are ongoing with one of our visitors (not sure if you want to name him but it is Terry Carroll). We are also hoping to schedule a study soon with a couple (the Medina’s) that were reached through the New Movers program.”

Beattie Road church of Christ, Albany, Georgia: Charles Harris (preacher) reports, “Our congregational effort begins June 6. We have the following groups set up: card writing, welcome bags, new mover baskets, and new mover visitors. All group leaders have been meeting with their groups. In the meantime, there have been a few Bible studies taking place. Hopefully, you’ll be hearing of more baptisms shortly. We’ve had more baptisms in the past couple of months than we’ve had in the three years I’ve been working here. On June 6, I’m also beginning a series of lessons with the purpose of helping us become more effective in our teaching the gospel to others.”